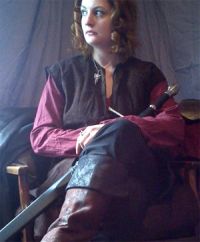 BRYNHILDR has no messages.

Find Other Singles In
Canada!

Life Long Gamer I've been an avid gamer since I can remember. Some of my earliest memories are from sitting on the floor in front of the tv, playing my Nintendo. I grew up with video games and they're a big part of my life.

I started off with a NES and a couple of games. Then my parents bought me a SNES, and I quickly acquired a decent library of games for someone my age. However as the system grew older, and the N64 loomed ever on the horizon, my parents sold my NES, much to my dismay. When they bought me an N64, I knew it was only a matter of time before I lost my treasured SNES and all the games on it I loved. Unfortunately, I was right.

With the exception of a Gameboy Colour and a couple new games my parents bought me, I decided that I was going to buy all my own video games from then on, so that I actually owned them and my parents couldn't sell them on me when they deemed them to be "obsolete". I saved up my allowance and bought a few N64 games before REALLY saving up to buy a PSone. I had a passion for gaming and really needed to own things myself, so despite being such a young child, I managed to put away enough money, and it's funny because now, as an adult, I can never seem to save money.

I currently own a PS2, a broken launch model PS3, a DS Lite, Slim Xbox 360, and a Wii I keep forgetting I even own. I had a brief encounter with a PSVita when it was relatively new, but that didn't last long.

I mostly play action games and old school RPGs, but I've enjoyed quite a few third person shooters and even the odd MMO or western-style RPG. My all time favourite game is probably the GBC remake of Dragon Warrior/Quest III. Other favourites include Mass Effect, Lost Odyssey, Devil May Cry, Dead Space and Lego Indy.

I was going to type more but keep getting blocked by the word limit, haha. Anyway drop me a line if you want to chat, or share your gaming stories.

FIND Other Singles In
Canada